Located along the St. Lawrence River, by Lac Saint-Louis, Fleming Mill stands on the site of Parc Stinson in the Borough of LaSalle. Built out of fieldstones deeply set in mortar, it represents Anglo-Saxon architecture and is the only one of this type that is still standing in Québec, as all the other windmills that we can still admire are characteristic of the French regime.

Emblem of the City of LaSalle, Fleming Mill suffered from the ravages of time until it was superficially restored by Burroughs Wellcome, which purchased a vast piece of land in the area to build its plant there. The mill's dilapidation at that point had become critical, as it was truly a sorry sight, with its crumbled stones, its calotte blown away and its mechanism all rusted.

In 1814, William Fleming, of Scottish origin, settled in the Parish of Lachine, opposite Lac Saint-Louis, an ideal place to build a windmill. He bought part of the land owned by William Reid and, the following year, he made the first wooden windmill there to "clean" barley and rice. In 1816, he installed new millstones to grind wheat. They were different from those used to clean barley, as they were placed on their side and not horizontally, as can be seen on French mills. Neighbours Jean-Baptiste Parent and Joseph Mallet were very amazed at all this.

In 1827, William Fleming signed an agreement with mason William Morrisson to erect a five-storey stone building with foundations, without having ever clearly indicated that it was a windmill. Compared to the French mills built during the colonization of New France, Fleming Mill stood out for its dimensions and size. It had a semi-spherical roof different from the pointy French calotte. Near its calotte, Fleming Mill had a chain and pulley system called "winding gear", all protected under a shelter. This chain enabled the miller to turn the sails to place them facing the wind. Its mechanism and the skirting that completed the system on the roof, the fieldstone masonry, surrounded by a wooden gallery on the second floor, reflect its British origins.

However, its sails seem to convey a certain influence from Dutch mills, due to the right angle placement of the bars at the centre of the stocks. A wooden board covers half of the perimeter of the tower. Experts agree in stating that this feature is a Canadian adaptation aimed at protecting the masonry from the northeastern winds. 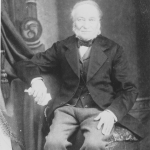 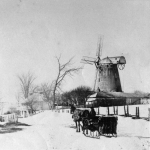