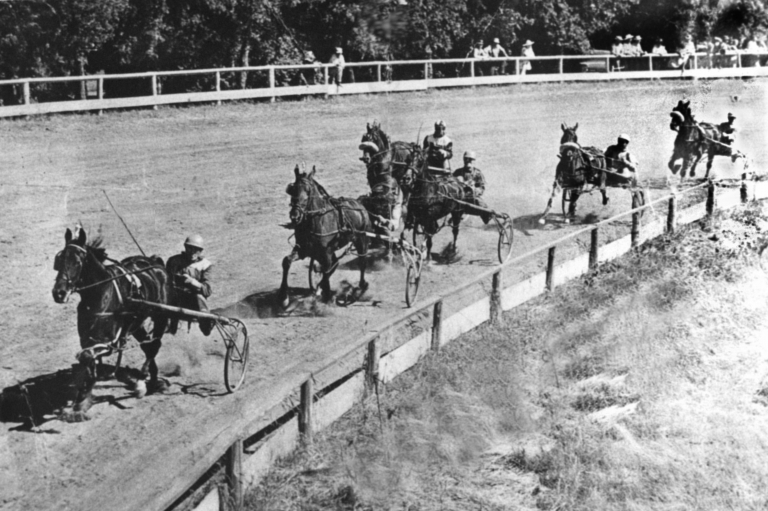 Near the miller's house there was a race track. During World War II, the horses still used to graze on the grass here and there in the Bronx district as they did in the backyard of Alcide Ouellette's house on 2nd Avenue.

In those days, horse racing lovers followed these sports events at a number of locations in Greater Montréal. In LaSalle, some residents got together to look after building a racetrack. Headed by Dr. Maurice Lacharité, the construction management was handled by Oscar Legault, Gustave Bourbonnais, Arthur Cumunel and Conrad Robert. It was the latter's sons, Yves and Guy, who then built the track located opposite the Lachine Rapids, not far from the golf course. They looked after its maintenance and supplying the horses with hay and oats.

On Sunday mornings, there was a lot of hustle and bustle between Rocky Beach and the golf course.

Participants from outside LaSalle came to the stables with their horses to prepare them for taking part in the three races on the program. LaSalle was part of a network located on the outskirts of Montréal and consisting of the racetracks in Beauharnois, Ormstown, Saint-Jérôme, Sainte-Martine and Valleyfield.

Conrad Robert's horses travelled in a trailer built by his son Guy. His horses were rated high enough to be included in a Blue Bonnets pacers program on the half-mile track.

In LaSalle, the crowds were so big in July 1944 that rows of seats were added all around the track. Nevertheless, the organizers struggled to recover their expenses. Controlling the payment of admission (set at 50 cents) at an open site proved very difficult. Moreover, there were no betting wickets as at Blue Bonnets. In fact, the betters made arrangements among themselves, without reimbursing the organizers paying the prizes, for the costs they had incurred. And to get the results of the race published in the newspapers, the organizers had to pay the newspaper sports editor. This situation plus the shady practices of the sports betting world got the better of the racetrack. Conrad Robert had no other choice than to sell his mare, Royal Suzan, who wound up, a few years later, among the best prize winners in all of Canada.